Perspectives on the Dublin West constituency

On October 27th a by-election will take place in the Dublin West to fill the seat vacated following the death of Brian Lenihan TD. 13 candidates will be contesting this election, based on the official candidate information provided by the Dublin County returning officer. The constituency is located in its entirety within Fingal county. Dublin West is largely comprised of two different local election constituencies focusing on the Greater Blanchardstown area – the Mulhuddart electoral area and the Castleknock electoral area (although the 2008 Constituency Commission controversially opted to move the western part of Swords Town into Dublin West).  As well as the administrative division between the two areas for local election purposes, there are also significant social and economic differences between the largely middle class Castleknock electoral area and the more working class Mulhuddart area. For instance, based on 2006 Census figures 47.3% in the Castleknock electoral area were in Social Classes 1 and 2 (professional and managerial), as against a level of just 27.6% in the Mulhuddart electoral area.  These socio-economic differences are expressed politically in terms of higher support levels for left-wing candidates in the Mulhuddart electoral area as against stronger support levels for centrist/right of centre candidates and the Green Party in the Castleknock electoral area. This is also evidenced in the notable differences in terms of turnout propensity between areas in this constituency; taking the 2007 General Election, for instance, where low turnouts, at the electoral division level, of 46.5% for Blanchardstown-Tyrellstown and 51.6% for Blanchardstown-Mulhuddart contrasted starkly with higher turnout levels of 76.1% for Castleknock-Park, 72.7% for Castleknock-Knockmaroon and 70.5% for Blanchardstown-Roselawn.

Over the following three decades ten general election contests have been fought in the constituency, as well as two by-election contests. Fianna Fail has emerged as the strongest party in most of the contests, with the exception of some of the earlier contests in the 1980s, when Fine Gael challenged for local supremacy, and the 2011 election, where the level of the decline in the party support was such that the party was beaten into fourth place in terms of first preference votes by Labour, Fine Gael and the Socialist Party-United Left Alliance. 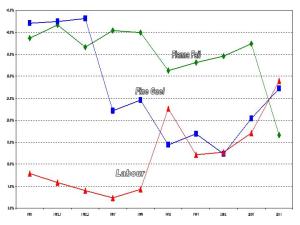 Fianna Fail support levels in the constituency had tended to fall between the thirty and forty percent range up to the collapse in the party’s support base at the 2011 contest. Party support (see graph above) had remained around the 40% in the 1980s, but fell to the low 30s at the 1992 contest before gradually recovering over the following three general elections to a level of 37.4%, before dropping to 16.6% at the 2011 contest (although the party still succeeded in retaining the seat of the late Brian Lenihan – Dublin West being the only Dublin constituency that Fianna Fail won a seat in at that contest).

Fine Gael was the strongest party in Dublin West in the elections of the early 1980s, winning three out of five seats in the 1981 and February 1982 contests as well as winning the June 1982 by-election. The election of 1987 marked a significant decline in Fine Gael fortunes in Dublin West (ironically the only Dail election that their 2011 by-election candidate, Eithne Loftus, has contested to date) with the party only winning one seat and losing their second seat to the Progressive Democrat candidate, Pat O’Malley. With Austin Currie joining the ticket in 1989 the party succeeded in regaining their second seat, but the boundary changes in the late 1980s (which resulted in the party’s local standard-bearer, the late Jim Mitchell, moving to Dublin Central) and 1990s (which resulted in Austin Currie moving to the new Dublin Mid West constituency) provoked a further decline in Fine Gael support levels in Dublin West, culminating in a failure to win even one seat in the 2002 contest (the first of two contests in which Dublin West was a three-seat constituency). The emergence of Leo Varadkar, who built up a strong support base in the Castleknock electoral area culminating with a strong result in the 2004 local elections, saw a recovery in Fine Gael fortunes in the late 2000s, resulting in the party regaining its seat in 2007 and challenging Labour for local supremacy in the 2011 contest.

The Labour Party history in Dublin West has effectively been dominated by Joan Burton. Prior to her success in the “Spring Tide” election of 1992 no Labour candidate (a list including one Mary Robinson) had come even close to winning a seat here and indeed no other Labour candidate has succeeded in winning more than three thousand first preference votes in a general election or by-election contest. Labour support dipped significantly in the 1997 contest (resulting in the temporary loss of the Burton seat) but improved again in the following elections (with Burton regaining her seat in 2002), culminating in the party emerging with the highest support levels of any party in Dublin West in the 2011 contest.

Leaving aside the Progressive Democrat success in the 1987 contest (and indeed the party did retain a degree of strength in the Dublin West over the following two decades, winning seats at a local level (Castleknock) if not in general elections), the other major political actors in Dublin West over the past two decades were both leaders of small left-wing parties, both established themselves locally with strong by-election performances before going on to win seats at a subsequent general election and both went on to lose their seats in a later general election. Tomas MacGiolla held a Dail seat in Dublin West between the November 1982 and 1992 electoral contests, having emerged as a significant local political figure with a strong showing in the May 1982 by-election (taking 14.8% of the first preference vote). Following the split within the Workers Party following the creation of Democratic Left, but also due in part to boundary changes which reduced the size of the constituency and saw him losing part of his local support base in the Ballyfermot area, MacGiolla lost his seat in 1992 and never regained it, although he did manage to take over ten percent of the vote in the 1996 by-election. That same by-election established Joe Higgins as a significant political actor in Dublin West – although he lost out narrowly to Brian Lenihan (Jr) in that contest having taken 23.7% of the first preference vote, he went on to win a seat in the 1997 contest, retaining this in 2002 but losing this seat in the 2007 General Election. He did however manage to regain the seat in the February 2011 contest.

Sinn Fein have contested this constituency on a consistent basis since the late 1980s, but the local strength of first MacGiolla and then Higgins has denied the party a political opportunity space here, with much of the left-of-centre vote in Dublin West being absorbed by these two candidates (as well as Burton). Sinn Fein’s best electoral performance in Dublin West to data came in the 2002 election, when Mary Lou McDonald succeeded in taking 8.0% of the first preference votes, although the party did win a council seat in Mulhuddart in 2004 (but lost this in the 2009 local elections). The Green Party has contest Dublin West in every general election contest since 1989, but the party has never won as much as five percent of the first preference votes, although the party’s 2011 by-election candidate, Roderic O’Gorman, did win the fourth highest vote share of any Green Party candidate in the 2009 local elections when he took 9.2% of the first preference vote in the Castleknock electoral area although he failed to win a seat in that contest. 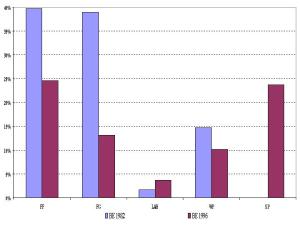 By-election support trends have largely mirrored trends in general election contests in Dublin West over the past three decades as shown in the above graph, although there was a notable decline in support for the two centrist parties of Fianna Fail and especially Fine Gael between the 1982 and 1996 contests. While Labour support in these by-elections has bordered on the derisory (and it is worth noting that Joan Burton was not a candidate in either of these contests, although she was an incumbent at the time of the 1996 contest), strong support for left-wing candidates can be evidenced in the support levels for the Workers Party’s MacGiolla  (across both contests) and the Socialist Party’s Higgins.