Posted on February 2, 2012 by Adrian Kavanagh

Given the day that’s in it, many will be considering the effect of gender quotas and whether increased levels of female candidates will necessarily translate into a higher level of female representatives. I would argue that the relative success of gender quotas is likely to be predicated, and potentially limited, by constituency size considerations with female candidates less likely to make a breakthrough in smaller sized (e.g. three seat) constituencies based on previous research noted on this site by Claire McGing and yours truly. It is of course not good to generalise on the basis of small numbers (and in looking at general election constituencies one is effectively looking at a relatively small (forty or so) number of cases, or constituencies – it is also worth stressing that the range of constituency size options for general elections is rather weak. In order to increase the number of cases being looked at and also the range of constituency sizes being considered, in this post I will look at the link between constituency size and female candidacy/success levels in the most recent set of County/City Council and Town Council elections, held in June 2009. It is of course fair to say that local electoral contests are somewhat different to general elections in terms of the issues and concerns being raised, as well as the geographical extent of the constituency units, but not dissimilar enough to mean that findings based on analysis of these are necessarily invalid in relation to consequences for general election constituencies. 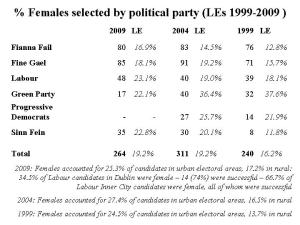 If we combine the vote and candidate statistics across both the range of City/County Council and Town Council election types, we can see the impact of constituency size on female candidatures, vote levels and success rates. The general trend suggested by Table 1 is that females were most likely to be selected to run in larger constituencies and female candidates were most likely to do better (in terms of seat numbers and vote share) in larger constituencies, with the notable exception of the relatively small number of cases (3) of three-seat constituencies.

So what does this mean in relation to gender quotas? If we want the higher level of female candidatures associated with quotas to translate into higher levels of female respresentation (and yes more female candidates will undoubtedly result in a higher proportion of female representation, but the percentage increase in candidacies need not necessarily translate into a similar increase in representation levels) then the best of way of ensuring this is through larger constituency units. For the new legislation to be ultimately successful, I would argue that there also needs to be a change made to the Electoral Act to allow for larger constituency units at general elections over and above the current range of 3, 4, and 5-seat constituency options.