Posted on September 24, 2018 by Adrian Kavanagh

A new boundary report was published today by the Constituency Commission, outlining the new European Parliament election constituency boundaries that will be in place at the next European elections in May 2019. BREXIT and the subsequent surrender of the United Kingdom’s European Parliament seats has led to the Republic of Ireland gaining an extra two seats in that Parliament. This report redrew the Irish election constituencies, taking those two added seats into account.

The main changes made by the Commission may be viewed in this image below: 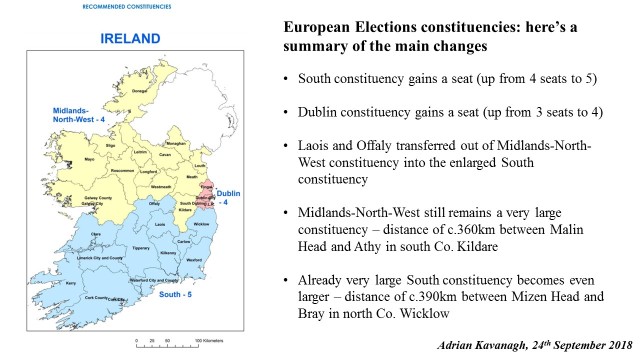 There are a number of ways in which the destinations of the seats in these (revised) European Parliament constituencies could be teased out in a scientific manner – with respect to analyses based on factors, such as who/what party came closest to a seat last time out (2014), current poll trends, vote management strategies, among others. However, as befits their status as effectively “mini-presidential elections”, personality politics often trumps “normal” politics/current poll trends in a European election contest and this often means that a scientific approach is of limited, or little, benefit in predicting likely winners here. Pick the right candidate and your party/grouping may pick up a seat you didn’t expect to win. Pick the wrong candidate and your party/grouping may lose out on a seat that current poll trends suggested you would gain/retain.

Lecturer at the Maynooth University Department of Geography. Email: adrian.p.kavanagh@mu.ie
View all posts by Adrian Kavanagh →
This entry was posted in Election boundaries, Election data, European Elections and tagged 2019, boundaries. Bookmark the permalink.