Constituency-level analyses of national opinion polls carried out during 2015: A review.

During the past year (2015), I carried out constituency-level analyses of thirty one different national opinion polls in order to produce Dail-seat estimates based on those support levels. These analyses involved fourteen Red C (Sunday Business Post-Red C and Paddy Power-Red C) polls, five Sunday Independent-Millward Browne polls, four Irish Times-Ipsos MRBI polls and eight Sunday Times-Behaviour & Attitudes polls. Averaging the different Dail seat-level estimates for the different political parties and political groupings across these thirty four different polls produces the following estimate: Fianna Fail 32.9, Fine Gael 52.7, Labour Party 5.7, Sinn Fein 29.3, Independents and Others 37.5. But notably different seat-estimates were produced depending on the time of year that these polls were held in, with this also depending on what polling companies were involved in the carrying out of these different polls, as will be illustrated in this discussion.

Constituency support estimates for different parties and groupings form the basis of this general approach asking the question in relation to different opinion poll results – what do these poll figures mean in terms of the likely number of Dail seats won by the different parties and groupings? Although the Irish electoral system is classified as a proportional electoral system, the proportion of seats won by parties will not measure up exactly to their actual share of the first preference vote, mainly because these first preference votes need to be filtered through the system of Irish electoral constituencies. In order to address this question, I estimate what the party first preference votes would be in the different constituencies, assuming similar (proportional) changes in party/political grouping vote shares in all constituencies to those suggested by the opinion poll support levels. This of course is a very rough model and it  cannot take appropriate account of the fact that changing support levels between elections tend to vary geographically, while it also fails to take account of the local particularities of the different regions in cases where no regional figures are produced in association with different national opinion polls meaning that there is no scope to carry out separate regional analyses based on these poll figures. Thus constituency support estimates for different parties will be over-estimated in some constituencies and under-estimated in others, but the expectation would be that the overall national seat figures figures estimated will be relatively close to the true level, given that over-estimates in certain constituencies will be offset by under-estimates in other constituencies. Based on these estimated constituency support figures, I proceed to estimate the destination of seats in the different constituencies. The constituency level analysis involves the assigning seat levels to different parties and political groupings on the basis of constituency support estimates and simply using a d’Hondt method to determine which party wins the seats, while also taking account of the factors of vote transfers and vote splitting/management (based on vote transfer/management patterns observed in the February 2011 election). Based on such an analysis and using the new constituency units (as defined in the 2012 Constituency Commission report), these analyses estimates what party seat levels would be, should such national support trends be replicated in an actual general election. (Analyses posted earlier on this elections commentary site suggests that Fianna Fail would seem to be the party most likely to be positively effected by the redrawing of the constituency boundaries, with the Labour Party being the party likely to be the most adversely effected by these changes.)

Due to unusually high/low support levels for some parties or political groupings in certain constituencies in the previous election, the model may throw up occasional constituency predictions that are unlikely to pan out in a “real election”, but the estimates here cannot be seen as highly accurate estimates of support levels at the constituency level as in a “real election” party support changes will vary significantly across constituency given uneven geographical shifts in support levels. But the ultimate aim of the models are to get an overall, national-level, estimate of seat numbers and these are based on the proviso that an over-prediction in one constituency may be offset by an under-prediction in another constituency. I have made some further corrections to the base support figures for the different parties for this analysis to take better account of the impacts on support of the 2012 Constituency Commission report boundary changes with especial reference to the Dublin constituencies. For instance, these figures better reflect the weaker positions of Fine Gael and Fianna Fail in Dublin Central after the moving out of the Ashtown area to Dublin West and the Botanic/Drumcondra area to Dublin North West, but also their stronger positions in Dublin West and Dublin North West. Fine Gael are assigned an extra seat in Dun Laoghaire on the basis that the Ceann Comhairle, Sean Barrett, will be automatically returned at the next general election (unless he decides to retire from politics before this) and this constituency will effectively be rendered a three-seat contest at the next general election.

The following table outlines the party Dail-seat level estimates produced for each of the thirty four national opinion polls analysed during the 2015 calendar year (and the four polls published in December 2014):

The following table shows how these figures can be averaged out according to which polling company was involved in the carrying out of the different polls, as well as the time of year (different quarters) in which these polls took place:

Based on the Dail seat estimate figures outlined in the tables above and the support trends evident in Figure 1, the best polls from Fianna Fail’s perspective would appear to have been those taken during the spring of 2015, while their worst figures came at the beginning of that year. The best poll for Fianna Fail was the Sunday Independent-Millward Browne poll of August 2nd, while the very last poll taken during the year – the Sunday Business Post-Red C poll of 10th January – was the party’s worst in terms of seat estimates figures.

Figure 1: Support trends for Fianna Fail across all national opinion polls during 2015

The best polls from a Fine Gael perspective would appear to have been those taken at the end of 2015, as Figure 2 especially suggests, while their worst figures came during the early spring and, to a lesser extent, the late summer. The best poll for Fine Gael was the Sunday Business Post-Red C poll of November 22nd, while the Sunday Independent-Millward Browne poll of August 2nd was the party’s worst in terms of seat estimates figures. 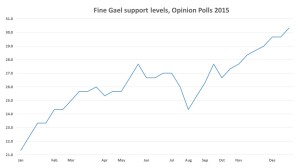 Figure 2: Support trends for Fine Gael across all national opinion polls during 2015

The worst polls from a Labour Party perspective would appear to have been those taken during the winter/early spring of 2015, while their best figures (in terms of Dail seat numbers) came during the summer of 2013.

Figure 3: Support trends for the Labour Party across all national opinion polls during 2015

The best poll for the Labour Party was the Sunday Business Post-Red C poll of 12th September, while the worst poll from a Labour Party perspective was quite obviously the Sunday Independent-Millward Brown polls of 15th February and 7th November. 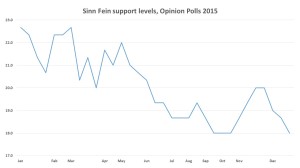 Figure 4: Support trends for Sinn Fein across all national opinion polls during 2015

Based on the seat estimate trends, Sinn Fein were seen to have performed significantly across the opinion polls held during the first half of the year. The best poll for Sinn Fein was the Sunday Independent-Millward Brown poll of 15th February, while the worst poll from that party’s perspective was quite obviously the Sunday Business Post-Red C poll of 25th October. 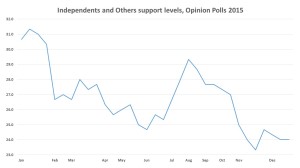 Figure 5: Support trends for the Independents and Others grouping across all national opinion polls during 2015

The Independents and Others grouping were seen to have performed significantly better across the opinion polls taken during the first and third quarters and less well across the opinion polls taken during the final three months of the year.  The best polls for the Independents and Others grouping was the Sunday Times-Behaviour & Attitudes poll of 19th July and the Sunday Business Post-Red C poll of 26th July, while the Sunday Independent-Millward Browne poll of 7th November was the worst in terms of seat estimates figures for this grouping.

On average, this was a much better year for the government parties in terms of opinion poll figures; coming after support levels for Fine Gael and Labour had fallen to especially low levels in the dying months of 2014. Over the course of 2015, as Figure 6 shows,  the two government parties made gains of roughly twelve percentage points in terms of their overall/combined support levels in opinion polls.

Figure 6: Support trends for the government parties (Fine Gael and Labour) across all national opinion polls during 2015

The overall trend in government party support levels headed in a generally upwards direction across most of the calendar year, with the exception of a dip in support levels during the summer period. As Figures 2 and 3 show, most of the improved government fortunes can be put down to the increase in Fine Gael support levels across 2015 (amounting to an increase of close to ten percentage points across these twelve months). This increase in government support levels has moved them from levels of support in the early part of 2015 that suggested that Fine Gael and Labour had very little chance of returning to power to support levels in the latter few months of 2015 that suggest that the two parties could be moving very close to the amount of votes required to return to power after the next general election.

In relation to this, it is interesting to note that back in December 2014/January 2015, a potential Fianna Fail/Sinn Fein alliance, based on the analysis of poll figures, seemed to be notably closer to the number of seats required to command a Dail majority (79 seats, not including the Ceann Comhairle) than the Fine Gael/Labour alliance was.

As Figure 7 shows, however, the Dail seat estimate levels (arising from the constituency-level analysis of the different opinion polls) for the government parties increased notably during the 2015 calendar year, to such an extent that the combined Fine Gael-Labour seat estimates stood more or less as the same level as the Fianna Fail-Sinn Fein seat estimates in December 2014/January 2015. The Fianna Fail-Sinn Fein seat estimate levels declined somewhat across the 2015 calendar, but not to the same extent as the level of Fine Gael-Labour increases.

Just as there was an improvement in the government party support levels – mainly driven by the improved fortunes for Fine Gael – there was also a relative improvement in support levels for the two traditional larger parties of the old Irish Civil War model of politics. The two “Civil War” parties had commanded vote shares of well in excess of eighty percent or even ninety percent during the general elections of the 1970s and early 1980s. But following the onset of the recession/economic crash these two parties experience a notable decline in their fortunes – initially Fianna Fail between 2008 and early 2011 and later Fine Gael, following that party’s entry into government in 2011, but particularly during the 2014 calendar year. 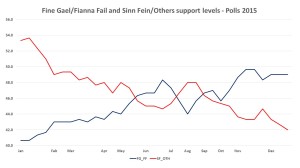 Figure 8: Combined support levels for Fine Gael/Fianna Fail, as compared with combined Sinn Fein/Independents and Others support levels, based on opinion polls during 2015

2 Responses to Constituency-level analyses of national opinion polls carried out during 2015: A review.