Fine Gael’s target constituencies for the next general election 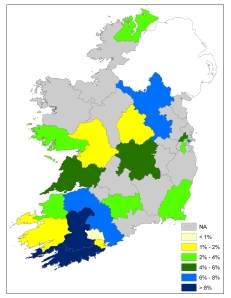 Swing (%) required for a Fine Gael gain by constituency

Following on the previous posts, which looked at marginal constituencies that could be targets for Fianna Fail and Sinn Fein gains at the next general election, I will now progress from the main opposition parties to carry out a similar analysis of the government parties’ prospects. As with the previous post, this analysis can only consider constituencies that parties missed out on seats in – it cannot consider constituencies where all a parties’ candidates were successful in being elected. This is an especial issue in the case of Fine Gael, given that all their selected candidates were successful in winning seats in twenty of the forty-three constituencies, meaning that this analysis is effectively only focused on half of the Dail constituencies. It also means that constituencies, such as Kildare South and Dublin North East, where Fine Gael could well have come close to winning further seats had they run more candidates, can’t be considered here.

One result of Fine Gael’s very successful general election campaign is the limited number of constituencies in which a relatively small swing to the party would result in further seat gains. As the map above shows, only five constituencies fall into the catagory of constituencies where a swing to Fine Gael of less than 2% would result in the gain of a seat (as illustrated by the yellow shading), including both of the Cork City constituencies (Cork North Central, Cork South Central), as well as Galway East, Longford-Westmeath and Kerry South. (Three of these potential gains would be made at the expense of Fianna Fail.) A further set of constituencies fall into the category of constituencies where Fine Gael would make gains on the basis of a swing of between 2% and 3% to the party, including Donegal North East, Dublin North West, Dublin South Central, Dublin South West, Kerry North-West Limerick, Galway West, Tipperary South and Wexford. So there is some scope for further Fine Gael gains on the basis of a small swing to the party at the next general election but this pales in comparison with the scope than Fianna Fail has to make gains on a similar-sized swing to the party, or indeed the Labour Party, as the next post will show. Ultimately Fine Gael’s limited scope for further gains at the next election is a victim of their success at the February 2011 election. As such, similar to the case of Sinn Fein, they may be better placed to win a higher proportion of Dail seats at the next general election if the number of Dail seats are reduced – that is to say they are unlikely to win a significant number of new seats in a 166-member Dail election but they could well be better placed trying to defend their existing seats in a reduced-member Dail. Ultimately some political parties will be winners and some losers in the face of a decision to reduce Dail seat numbers and ultimately party support levels and party support patterns/geographies of support at that election will determine who are these winners and losers. But on present support levels Fine Gael might well be best placed to benefit from what disproportionalities may arise from a new constituency configuration, in the same vein as the manner in which they attained a seat bonus of almost 10% based on the 2011 election results.

Given Fine Gael’s successes at General Election 2011, there are a number of constituencies where party seats would be vulnerable even with small percentage swings away from the party to opponents. The earlier post on constituency marginality outlines some of these cases, which include a number of especially vulnerable constituencies for Fine Gael where a swing of under 2% away from the party would see it lose seats. Constiuencies that would fall into this category would include Carlow-Kilkenny, Cyavan-Monaghan, Cork North-West, Dublin Mid West, Dublin North, Dublin South, Galway West, Louth and Meath West.