Which constituencies have the highest Yes or No votes and turnouts? A geography of European Union referendum votes 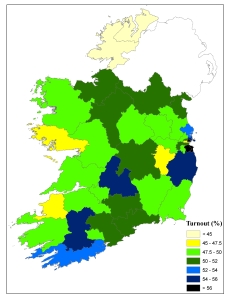 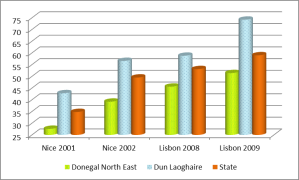 The extent of the difference in turnout levels between the constituencies that usually have the highest and lowest turnout level in European Union Treaty referendum elections is readily evident from Figure 1b above. 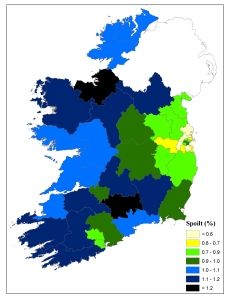 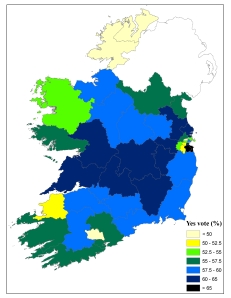 On average, support for the Yes side in these European Treaty referendum votes tends to be slightly higher than average in the Dublin region (average Yes vote of 58.5%) as opposed to the level for the rest of the state (57.6%), with the Dublin average being somewhat lower than that for the Rest of Leinster (59.7%) but higher that the levels for Monster (57.0%) and especially Connacht-Ulster (55.8%) with the average level in Donegal constituencies falling to as low as 48.8%. Indeed, the average Yes vote in the two Donegal constituencies is just under twenty percent that the average Yes vote associated with the two Dun Laoghaire-Rathdown constituencies, Dun Laoghaire and Dublin South (and yes, I know the Rathfarnham electoral area, part of South Dublin county, falls within the Dublin South constituency also!) 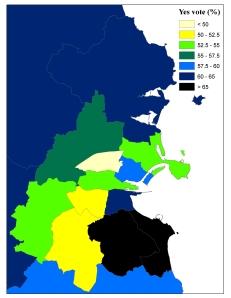 Looking more closely at Dublin, a significant class divide emerges in terms of support patterns in European Treaty referendums, with the highest Yes vote levels being associated with the more middle class constituencies, such as Dun Laoghaire and Dublin South, but with higher than average support levels for the No side in these campaigns being found in the more working class constituencies, such as Dublin North West, Dublin South Central and Dublin South West.

Taking account of the geographical trends at the national level and within Dublin, there is a remarkable consistency between the geography of Sinn Fein support and the geography of support for the No side in these European Treaty referendum campaigns. In light of this, it may be interesting to study the “No” support trends in constituencies in which Sinn Fein experienced a significant increase in support at the 2011 General Election.