A Geography of Voter Turnout at the 2016 General Election: A Focus on Dublin City

Voter turnout can be defined as the percentage of people who turn out to vote in a given election. In the USA, voter turnout levels are calculated the percentage of the valid adult population (aged 18 and over) who turn out to vote. In Ireland and other European countries, however, voter turnout levels are expressed as a percentage of the number of people on the electoral register. Thus, if there are problems with the electoral register, turnouts may be over, or under, estimated in these countries, including Ireland. Rather than skewing/determining the geography of voter turnout levels in Ireland, however, register inaccuracies have the effect of actually dampening the extent of turnout differences. Research based on the 2002 General Election and 2002 Census showed that registration levels in high turnout areas – mainly rural areas, but also including some settled middle class urban areas – tended to be over-estimated, meaning that the “real turnout” levels in these higher turnout areas (or the turnout level as related to the valid adult population) was actually higher than the recorded ones.  By contrast, registration levels in very low turnout areas – mainly inner city areas and commuter belt areas – tended to be under-estimated, meaning that the “real turnout” levels in these low turnout areas were actually even lower than the recorded levels.

Despite often being viewed as a country with a high level of interest in all things political, Ireland has had one of the lowest average turnout levels in Western Europe. For instance, only Portugal and Switzerland had lower average turnouts than Ireland did during the 1990s. At the same time, turnout rates were declining in western democracies in the last few decades of the 20th Century, with some particularly significant drops evidenced between electoral contests; for instance the UK general election turnout level fell from 71.5% in 1997 to 59.4% in 2001. Low and declining voter turnout levels also became increasingly characteristic of Irish electoral contests from the early 1980s onwards, with general election turnouts falling by 13.5% between 1981 and 2002. Turnout levels fluctuated significantly during the Celtic Tiger period, and especially in those areas that had been impacted on the most by the social and economic changes of the late 1990s and 2000s, associated with the Celtic Tiger, namely the more urban parts of the state and most notably in Dublin and its commuter belt. At the national level, turnout trends in the earlier part of this period marked a continuation of a sustained decline in electoral participation levels that had marked all Irish electoral contests since the early 1980s. The low turnout levels for the 2002 contest marked the culmination of this trend, as subsequent electoral contests, starting with the second Nice Treaty Referendum in 2002, would see a recovery in turnout levels across different electoral contests, with these generally returning to levels experienced before the start of the Celtic Tiger era, with the exception of some notable low turnout contests.

Trends in relation to fluctuating voter turnout patterns were most pronounced in urban Ireland, with turnout levels falling by almost ten percent in Dublin and its commuter belt between 1992 and 2002 but then rebounding back almost to the 1992 levels for the 2007 contest and then proceeding to exceed the 1992 levels at the 2011 General Election. Ultimately, with the level of turnout improvement not being as marked in the generally higher turnout rural areas, this resulted in a significant narrowing of the very significant turnout differences between rural and urban Ireland that had characterised the low turnout elections of 1999 (local and European elections) and 2002 (general election). But the low turnout 1999 and 2002 elections were also characterised by dramatic turnout differences within the low turnout urban areas, with very notable class-based turnouts being observed in a number of working class areas in Dublin, including Ballyfermot/Cherry Orchard, North Clondalkin, West Tallaght, Ballymun and Darndale, during this period, in addition to the Dublin Inner City area. The 2000s, however, marked an improvement in turnout levels in a number of these working class areas – with the notable exception of the inner city – and resulted in a narrowing of the class-based turnout differences within Dublin, with the narrowing of these turnout differences being particularly accelerated during the period of the Economic Crisis, from 2008 onwards.

Turnout trends at the 2016 General Election proved to be rather disappointing, in that the trend of improving turnout levels, observed across much of the 2000s, was halted. Turnout levels, nationally, fell by almost five percent. Well over one million registered voters did not turn out to vote at this election – a number that was roughly twice as large as the number supporting the largest political party at this election, Fine Gael (Figure 2). 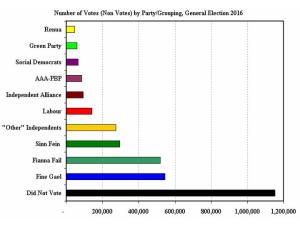 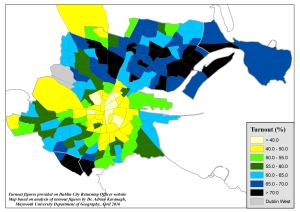 Figure 3: Voter turnout levels (%) by election division in the Dublin City constituencies at the 2016 General Election

The more working class parts of the city, dominated by Dublin City Council housing estates, also tended to have lower than average turnout levels for this contest. But the gap in turnout levels between these areas and the more middle class areas in the city has narrowed considerably over the past decade and a half. Turnout levels in some traditional working class areas were indeed close to, or even higher than, the average turnout level across the five Dublin City constituencies (59.7%); most notably in the case of the West Cabra area.  While the data is not available, at present, to study the rest of the Dublin region, the general trend in other parts of Dublin (Fingal, South Dublin County and Dun Laoghaire-Rathdown) in previous elections – most notably the 2014 Local and European elections – has pointed to a similar narrowing of class-based turnout differences in the rest of Dublin, with improving turnouts levels being evident in working class areas, such as North Clondalkin, across the 2000s.

The general trends in recent years suggest that, as class becomes a less significant factor in terms of shaping/explaining turnout variations across the city, residential mobility is emerging as a particularly significant factor in terms of pointing towards/resulting in areas of lower voter turnout levels. This can be evidenced in the trends observed in Figure 3 (above), as well as in other previous voter turnout studies on this site, which observe low turnout levels in the Dublin Inner City, but also other new residential areas such as parts of the Greater Blanchardstown and South Lucan areas as well as the Northern Fringe. Analysis that I carried out in relation to the 1999 and 2002 elections in the South West Inner City showed that the main low turnout areas there were not, as might have been expected, the Dublin City Council flat complexes and housing estates. Instead, the very low turnout levels were associated mainly with the (then) new private gated apartments in that area.

That being said, many of the areas with higher levels of residential mobility also tend to have higher levels of non-Irish/UK citizen residents – especially the Dublin Inner City. While non Irish/UK citizen residents may have been on the electoral register for these areas, they would not have been eligible to vote in the general election – have the right to only vote in local elections, or local and European elections. Therefore, a high number of non-Irish/UK citizen residents on the register would have pushed down the turnout figures here by default. If I have the time (and money!) to purchase and analyse the marked registers of electors for these constituencies, I will follow up on this to uncover what general election turnout levels in these areas would be if non Irish/UK citizen residents were not included in the analysis. (Similar analysis in the past shows that the turnout levels in these area tend to be higher by a few percentage points, but turnout levels still remain low relative to other areas in the City – and, of course, the state.) Such analysis is not possible when only using the ballot reconciliation figures.

To conclude, as noted in the earlier post discussing voter turnout in the 2011 General Election, it must be noted that voter turnout levels are the result of a multiplicity of different turnout decisions made by individual electors, with these in turn being shaped by a host of a number of, often conflicting, factors, and also by the places in which they live and work. A range of socio-economic, demographic, political and institutional factors help explain why turnouts between areas differ, with some of these listed below. Perhaps the most significant factor of all in terms of predicting turnout variation is housing tenure, as this is a factor that relates to nearly all of the other key influences on turnout variation.

Factors that tend to be associated with/result in higher turnout areas/levels include:

Factors that tend to be associated with/result in lower turnout areas/levels include:

1 Response to A Geography of Voter Turnout at the 2016 General Election: A Focus on Dublin City