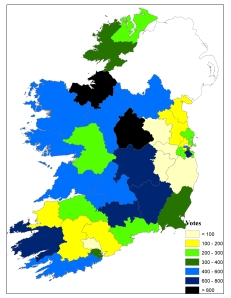 Number of Seanad vocational panel votes per candidates by constituency, 1997-2007

With significantly higher numbers of eligible voters and candidates, as detailed in the previous two posts, it would be expected that a similar spatial pattern would be observed when looking at the number of votes that candidates from different constituencies have won in previous Seanad contests. Looking at the vocational panel voting trends per constituency for the last three elections (1997, 2002 and 2007), the maps above shows that the spatial trend here is quite similar to that for the previous of studies of the available electorate and the nominated candidates. Rural, two-county, constituencies, such as Longford-Westmeath and Sligo-North Leitrim, located in the Midlands and part of the North-West region are again associated with significantly higher levels of Seanad votes thna for the rest of the state. However, Waterford candidates, despite their constituency having a relatively high available pool of Seanad voters, are seen to be well below the state average in terms of winning Seanad votes. By contrast, some Dublin constituencies such as Dublin South and Dublin Central (and, to a lesser degree, Dublin South East) fare well in terms of the number of votes that candidates from their constituencies have attracted, with the number of votes won by candidates from these constituencies well in excess of those for other Dublin constituencies and comparing well with levels for other parts of the state.

Indeed, while the Dublin region only accounts for 17.2% of the available Seanad electorate (based on 2011 figures) and only 17.1% of the candidates that have been nominated to contest the vocational panel elections over the 1997, 2002, 2007 and 2011 contests, Dublin candidates have fared proportionally better when it comes to winning votes. Candidates from the Dublin region have won just under 22% (21.9%) of all votes cast in the vocational panel contests over the 1997, 2002 and 2007 contests, as against 31.4% for Munster-based candidates, 20.4% for Leinster candidates and 26.3% for candidates hailing from the Connacht-Ulster region. Hence, proportionally higher numbers of Seanad votes are being won by Dublin candidates than those for other regions (especially Leinster) and over and above what would be expected based on the number of eligible Seanad voters based in this region. This may be down to a higher profile being enjoyed by Dublin-based candidates, but it may also be down to party leaderships specifically targeting candidates from this region for support (as with the Martin List in the 2011 contest) at times when party support and representation levels in the capital may be low.

So what about seat allocations and their geography? 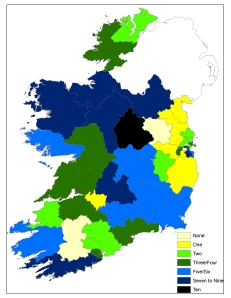 The map above, which looks at the number of seats won/allocated across all panels and based on Taoiseach’s nominees, shows again a strong rural focus, although interestingly – allowing for the fact that Longford-Westmeath (and in particular the Westmeath area) is by far the most successful of the constituencies – the North West emerges as significantly more successful than the Midlands as against the trends for the Seanad electors/candidates geographies. While the Greater Dublin region (Dublin and constituencies located within its commuter hinterland) compares weakly with the rest of the state, there are some Dublin constituencies whose success levels in terms of winning Seanad seats are on a par with the stronger of the rural constituencies, namely Dublin South and Dublin Central.