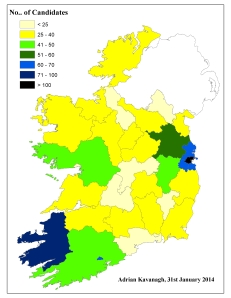 Figure 1: Total number of candidates selected by county/local authority area as of 31st January 2014. Not surprisingly, the higher number of candidates are associated with the more urban counties and/or the larger counties. But, as Figure 1 shows, there are some interesting exceptions here. Note that this information is only up to date as of Friday 31st January 2014 (3.00pm) – a series of selection conventions in one specific county/local authority area would of course significantly change that county/area’s relative ranking on an updated version of this map.

With all the final candidate lists added to the site now (including the candidates for the delayed Ballybay-Clones contest), I have accounted for 2,038 candidate selections/declarations for the 2014 Local Elections, as detailed across the different posts on this website.

The electoral areas with the highest number of selected/declared candidates, as accounted for across these different pages,  are

There will be an average of 2.15 candidates per seat at these City and County Council elections, up from an average level of 2.07 at the 2009 elections.

Lecturer at the Maynooth University Department of Geography. Email: adrian.p.kavanagh@mu.ie
View all posts by Adrian Kavanagh →
This entry was posted in Candidates Local Elections 2014, Local Elections 2014 and tagged 2014, boundaries. Bookmark the permalink.