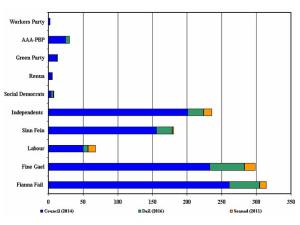 Elections to the five different Seanad vocational panels (as well as for the Trinity and National University of Ireland constituencies) for the 25th Seanad will take place over the coming months. While there are obvious restrictions in terms of the electorates for the Trinity and NUI constituencies, the electorates for the five vocational are solely comprised of elected politicians, namely

Assuming that co-options are in place to replace the 49 City and County Councillors who won seats at the February General Election (as well as Cllr. Willie Kennedy – ar dheis Dé go raibh a anam and Cllr. Dan Joe Fitzgerald – ar dheis Dé go raibh a anam), this means that the total size of the electorate for the Seanad vocational panel elections will be 1,160. If one was to assume that every one out of these 1,160 TDs, Senators and Councillors vote in these elections, this figure would translate into quotas of around:

Figure 1 shows the relative strength of the different political parties and groupings in terms of the number of votes they control for the April 2016 Seanad vocational panel elections. This takes accounts of any defections relating to City and County Councillor numbers, as well as involving the remaining 53 Senators.

As the largest party at the local authority level and with an increased number of Dail seats following February’s election, Fianna Fail are the strongest party in this regard and the party controls votes equivalent to 1.6 quotas on the Cultural and Educational Panel, 2.2 quotas on the Adminstrative Panel, 2.7 quotas on the Industrial and Commercial Panel and 3.3 quotas on the Agricultural/Labour panels. Barring an unforeseen collapse in party vote management/transfer patterns, Fianna Fail will win at least 13 Seanad seats, at a conservative estimate. The fractured nature of the Independents grouping and the limited clout of the smaller parties means that Fianna Fail could win as many as 16 Seanad seats, or maybe even one or two more, in April’s election, unless coherent alliances are formed between different independents and/or the smaller parties.

Fine Gael still remain the largest party at the national level, with the highest number of outgoing Senators – even allowing for defections and the wins by Hildegarde Naughten/Michael D’Arcy in February’s elections – and the highest number of TDs in the incoming Dail. But – with defections to and from the party also factored in – Fine Gael has 28 fewer City and County Councillors than Fianna Fail has. Unless Fine Gael can negotiate alliances/voting pacts with other parties and groupings, the likelihood remains that Fianna Fail will emerge as the largest party in the new Seanad. Fine Gael controls votes equivalent to 1.5 quotas on the Cultural and Educational Panel, 2.1 quotas on the Adminstrative Panel, 2.6 quotas on the Industrial and Commercial Panel and 3.1 quotas on the Agricultural/Labour panels. At a conservative estimate, Fine Gael can expect to win at least 11 or 12 Seanad seats, barring an unforeseen collapse in party vote management/transfer patterns. The fractured nature of the Independents grouping and the limited clout held by the smaller parties may well allow Fine Gael to win as many as 14 or 15 seats in these elections, however.

Having made notable gains at the 2014 City and County Council elections and the February 2016 General Election, Sinn Fein stand poised to make significant gains in the Seanad vocational panel elections. (Sinn Fein won three seats in 2011, although one of their Senators – David Cullinane – is now a TD.) Sinn Fein controls votes equivalent to 0.9 quotas on the Cultural and Educational Panel, 1.2 quotas on the Adminstrative Panel, 1.6 quotas on the Industrial and Commercial Panel and 1.9 quotas on the Agricultural/Labour panels. Unless Sinn Fein candidates prove to be very unlucky or the Sinn Fein candidates struggle to win vote transfers from other parties/groupings, Sinn Fein should expect to win up to 8 seats in these Seanad elections. A voting pact with other members of the Right2Change grouping could copper-fasten such seat gains, unless Sinn Fein had to “surrender” seats in order to facilitate other members of this grouping. The other members of the Right2Change grouping, as well as the Anti Austerity Alliance, can probably command roughly 0.3-0.5 quotas across all of the panels; a level of votes that could be crucial in terms of the final seats in some vocational panels.

Mirroring Sinn Fein’s current position, Labour were able to translate strong performances at the 2009 Local Elections and 2011 Dail election into 8 seats at the 2011 Seanad vocational panel elections. Their serious losses at the 2014 and 2016 elections, however, means that the party faces a struggle to win seats in most, if not all, of the vocational panels in the upcoming Seanad election, unless the party can negotiate voting pacts/alliances with other groupings. As of now, Labour controls votes equivalent to 0.4 quotas on the Cultural and Educational Panel, 0.5 quotas on the Adminstrative Panel, 0.6 quotas on the Industrial and Commercial Panel and 0.7 quotas on the Agricultural/Labour panels. As is obvious here, the party does not control enough votes to guarantee seats on any of the vocational panels – even the larger Labour and Agricultural vocational panels. But the party has still have a sufficient number of votes to allow it negotiate alliances with other parties and groupings, which possibly could at least help the party to at least win seats in the two largest (Agricultural and Labour) panels.

Lecturer at the Maynooth University Department of Geography. Email: adrian.p.kavanagh@mu.ie
View all posts by Adrian Kavanagh →
This entry was posted in Seanad election and tagged Seanad. Bookmark the permalink.