Adrian Kavanagh, 28th April 2016 (This post will be (hopefully) updated, as and when counts proceed over the rest of the day.)

Counting for the 2016 Seanad elections commenced on 25th April 2016 with the counting of votes for the 5-seat Cultural and Educational Panel. The second of the panels to be counted were be the 11-seat Agricultural and Labour Panels. Counting for these panels commenced on 26th April, with counting for the Labour panel continuing into the following  morning. The next panel to be counted was be the 9-seat Industrial and Commercial Panel, with counting commencing around midday on 27th April and continuing late into that night. The final panel to be counted would be the Administrative Panel.

The last constituency/panel to be counted in the 2016 Seanad Elections was the Administrative panel. The First Count for this panel would commence at 10.00am on Thursday 28th April 2016 and details for this and subsequent counts may be viewed here.

In the 2011 election, Fine Gael both won 2 seats on this panel, while Fianna Fail and Labour both won two seats. Labour are already certain to lose one of their two seats, as only one Labour Party candidate is contesting this panel in 2016.

17 candidates are contesting this panel (see here for more details on these candidates) – including 7 on the “Outside” panel and 10 on the “Inside”. This is one of the smallest of the vocational panels. As a result of this, the quota for this panel will be notably largerer than for the 11-seat Labour and Agricultural Panels. The quota for this panel is likely to be around the 140.5 vote level (or 12.5% of the votes). Based on the earlier analysis of the number of Dail, Council and (outgoing) Senator votes controlled by the different parties and groupings, both Fianna Fail and Fine Gael will expect to win 2 seats here while Sinn Fein will be expecting to win 1 seat. Based on the stronger than normal support levels for independent candidates in a Seanad contest evident in yesterday’s election, there would be expectations that one Independent could win a seat on this panel. This panel will offer Labour its toughest challenge in these Seanad election and Kevin Humphries will need to be able to attract votes and vote transfers from outside his own party to ensure that he is elected – the number of Council, Dail and (outgoing) Seanad votes controlled by Labour amounts to just 0.5 quotas on this panel.

The Count: Two candidates were elected on Count 1. Fianna Fail’s Mark Daly topped the poll with a very impressive 184.000 first preference votes. Sinn Fein’s Niall Ó Donnghaile  was also elected on this count, winning 150.000 first preference votes. As in the last contest (Industrial and Commercial), the Sinn Fein candidate was just doing enough to ensure they were elected on the first count, thus ensuring that there would be a number of “floating” Sinn Fein votes to be won by other candidates. Down the rankings, Fine Gael’s Maura Hopkins put in a strong performance to be ranked in third place on the first count with 117.000 votes. In Labour’s toughest constituency (given the larger sixe of the quota), Kevin Humphries managed to win the biggest vote tally of any Labour Seanad candidate, winning 99.000 first preference votes (meaning that he had gained close to forty votes from outside the Labour Party ranks). That being said, he was still a lot further away from the quota on the first count than had been the case for the other three Labour candidates in the three previous panel contests. 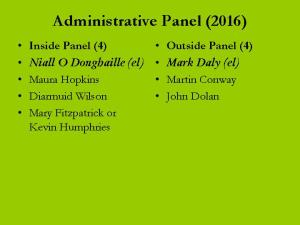 Daly’s very large surplus of 43.326 votes was transferred on the following count. A significant chunk of this surplus went outside the Fianna Fail ranks, with 71.3% of the daly surplus being shared out between the remaining Fianna Fail candidates. Gaining 14.193 votes in this count, Mary Fitzpatrick fared the best of the Fianna Fail candidates, while Diarmuid Wilson gained 8.466 votes. Over 17% of the Daly surplus went to independent candidates, with John Dolan (2.739) and Thomas Welby (2.241) faring particularly well here. On Count 3 there was a very strong transfer to the Independents from the Ó Donnghaile surplus, winning 6.968 (73.1%) of the 9.464 transferable Ó Donnghaile surplus votes. John Dolan (3.640) and Lorraine Dempsey (2.080) fared particularly well on this count. At the end of this count, Mary Roche (12.765) was eliminated.

The Power transfer effectively concluded the contest for the three Outside Panel seats, given that Eamonn Coghlan – then standing on 39.308 votes – was eliminated at the end of the count, leaving only Martin Conway and John Dolan in the field as Outside Panel candidates, with two Outside Panel seats still left to be filled. While both candidates would remain in the count, they were now both guaranteed seats in the next Seanad. Just over three-quarters of the Power transfers went to the two remaining Fianna Fail candidates – 21.984 out of the 29.333 transferable Power votes (75.2%). Another concern here for Fianna Fail was the fact that more of these went to Wilson (12.639) than to Fitzpatrick (9.245), given that Fitzpatrick was now effectively in a close contest with Kevin Humphries (and potentially also Thomas Welby and Tom Sheahan) for the last seat on the Inside Panel. This count had pushed Fitzpatrick ahead of Humphries, but only narrowly so (0.137 votes).

The next two counts would see a significant number of Fine Gael votes being transferred, following the eliminations of Eamonn Coghlan and Paudie Coffey. On Count 9, there was a very strong Fine Gael transfer, with 33.249 (87.8%) of the 37.851 transferable Coghlan votes being shared out among the remaining Fine Gael candidates, with Hopkins (14.000) and Conway (13.249) faring particularly well in terms of winning vote transfers. Paudie Coffey gained 4.000 vote transfers but, standing on 53.498 votes at the end of this count, he was to be eliminated following this count (Count 9). Humphries fared slightly better than Fitzpatrick on this count to move 0.612 vote ahead of her. Given the closeness of this contest and the next set of likely eliminations/transfers, it now looked increasingly likely that the destination of the last seat (or rather, last Inside Panel seat) here would be determined by the Thomas Welby transfers, especially as the other potential contender for the last Inside seat – Sheahan – had only gained 2.000 transfer votes from the Coghlan transfers on Count 9. The election of Maura Hopkins was indeed confirmed on the following count (Count 10). 48.000 of the 53,249 (90.1%) transferable Coffey votes went to the remaining Fine Gael candidates, with Hopkins (gaining 22.000 votes) faring especially well here, while 15.000 votes went to Conway and 11.000 to Sheahan. Humphries gained 2.000 votes and Fitzpatrick gained 1.249 votes – widening the margin between them to 1.365 votes.  On Count 11, the transfer of the Hopkins surplus all went to the two remaining Fine Gael candidates – 9.100 to Sheahan and 6.300 to Conway. However, Sheahan – then standing on 87.449 votes – was eliminated at the end of the count – with the Inside/Outside rule determining that John Dolan (despite being some distance behind on 58.270 votes) remained in the contest (and would be guaranteed a seat).

At this stage, as it is became increasingly obvious that the last seat in this panel (and indeed in the Seanad 2016 elections) would be between Mary Fitzpatrick and Kevin Humphries, the following factors seemed likely to have a bearing on this result: 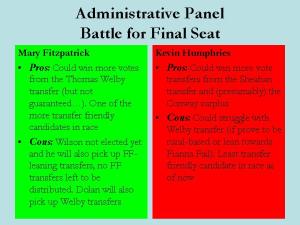 The Sheahan transfer on Count 12 would effectively decide the final seat here. A larger than anticipated transfer to Kevin Humphries (27.200 votes – 34.5% of the transferable Sheahan votes) edged him well clear of Mary Fitzpatrick, who took just 3.198 votes on this count – the smallest number of transfers of any of the remaining candidates. Less than half of the transfers went to the remaining Fine Gael candidate, Conway (36.000 votes, or 45.6% of the transferable Sheahan votes), but this weaker than normal Fine Gael transfer was not an issue for the party as it was more than enough to ensure Conway exceeded the quota. With a Conway surplus of 10.854 votes to be transferred on the following count, the gap between Humphries and Fitzpatrick would undoubtedly be too large to breach over the remaining counts. Indeed, the likelihood was that the transfer of the Conway surplus would ensure Humphries was pushed over the quota on the following count.   This indeed proved to be the case. Nearly three-quarters of the Conway surplus went to Humphries and this was more than enough to ensure he exceeded the quota. 7.942 (73.3%) of the 10.830 transferable votes from the Conway surplus went to Humphries (there were no transfer votes for Fitzpatrick, by contrast). The remainder of the Conway surplus was shared between Wilson (13.3%) and the two remaining independent candidates (13.3%).

It seemed as if Mary Fitzpatrick would be losing out on a seat in this panel, for the second Seanad election in a row, due to the Inside/Outside rule. (It could also be argued that Thomas Welby lost out due to this rule, as – had John Dolan been eliminated earlier in the count – he could potentially have edged ahead of Mary Fitzpatrick with a strong transfer from Dolan.) However, the transfers of the Welby votes on the final count (Count 15) actually saw Dolan overtake Fitzpatrick on this count. 59.777 of the 80.022 transferable Welby votes went to Dolan (74.7% of the total), while 11.000 went to Wilson and 9.245 went to Fitzpatrick. This meant that Wilson exceeded the quota (by a margin of 3.783 votes), but it also meant that Dolan was now 4.046 votes ahead of Fitzpatrick.

At the end of this count, the candidates who were been elected on this panel included: