As noted in last month’s post, the national voter turnout rate of 60.5% – which was just 9.4% lower than the turnout level for the 2011 General Election – for the Marriage Equality (and Presidential Candidate Age) referendum contests compared very favourably with the turnout levels for other referendum elections, especially given that these were “stand-alone” contests, which did not take place on the same day as a general, local, European or Dail by-election contest (with the notable exception of Carlow-Kilkenny). 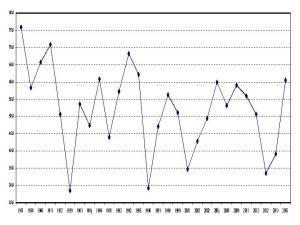 As with previous referendum election contests, turnout levels for these contests tended to be higher in the more urban constituencies (62.4%, on average) and especially in Dublin (63.9%). 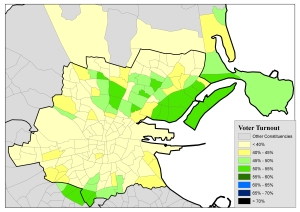 Figure 3: Voter turnout (%) levels by electoral division in the Dublin City constituencies for the 2013 Seanad Referendum

Given the relatively high turnout levels (for referenda) associated with these contests, it is perhaps not suprising that turnout levels in the May 2015 elections compared very favourably with the last referendum contest, the 2013 Seanad Referendum, as suggested by the turnout map for this election (Figure 3). 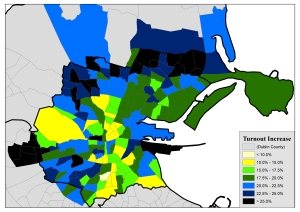 Figure 4: Differences in voter turnout (%) levels by electoral division in the Dublin City constituencies between the 2015 Marriage Equality and 2013 Seanad referendum contests

Indeed, as Figure 4 shows, turnout levels improved notably across all of the Dublin City constituencies area between the 2013 Seanad and 2015 Marriage Equality/Presidential Candidate Age referendum contests.  Turnout levels were at least ten percent higher in most of this area. But the extent of the turnout increase was even more notable in most of the more working class parts of the Dublin City constituencies area. In areas such as Cherry Orchard, Ballyfermot, Finglas, Ballymun, Darndale, Crumlin and Ringsend, turnouts were over twenty percent higher (and over twenty five percent higher) than the levels recorded in these areas for the 2013 Seanad Referendum, as illustrated by Figure 4.

Figure 5: Percentage increase in voter turnout by social class area in Dublin City between the 2013 and 2015 referendum contests