Voting patterns and turnout levels in Referendum elections in the Republic of Ireland, 1937-2013

Posted on September 12, 2013 by Adrian Kavanagh

After 4th October, there will have been thirty seven different referendum contests held in the history of the state, but some of these contests have taken place on the same date, while the same issue has been the focus of a referendum vote on more than one occasion in a number of instances. The most recent cases include the holding of two referendum votes on the Nice and Lisbon treaties, but the issues of Divorce and the Electoral System (proposals to change the Irish system to a first past the post one) have also been the focus of referendum contests on two, or more, occasions.  In most of these cases, the failure of a referendum proposal relating to a certain issue has been followed by the passing of another, ultimately similar, proposal on that issue in a referendum vote – in some cases taking place little more than a year after the initial vote (the Nice Treaty and Lisbon Treaty referenda) but in other cases taking place roughly a decade later (the referenda on the introduction of Divorce and the proposal to change the electoral system). The 1968 referendum is the only case where the re-running of a referendum vote on an issue has resulted in the defeat of that proposal on a second occasion.

As the graph below shows (Figure 1), voter turnout levels have varied quite significantly in Irish referendum election contests, ranging from a high level of 75.8% for the very first such referendum on the draft constitution in 1937 to a low of 28.6% for the 1979 referenda on adoption rights and university representation in the Seanad.  The mean turnout level across these different referendum polling days is 51.76%. By default, the numbers turning out to vote in a referendum will always be somewhat lower than those for general and especially local election as a not insignificant number of people (all registered voters with exception of Irish citizens) on the register do not have the right to vote in referendum contests (although in more recent times these numbers have tended to be excluded from the valid poll figures for referendum contests, meaning that the percentage turnout level tends to be more accurate).  Turnout levels vary depending on the time period involved, with higher turnouts having generally been recorded for the earliest referendum contests held, but also with a notable difference in turnout levels between the contests held in the low turnout era of the late 1990s and early 2000s against those held in the mid-to-late 2000s when turnout levels, on average, showed a somewhat marked degree of improvement. Turnout propensity in referendum elections may also be shaped based on whether other types of elections are being held on the same day as the referendum contest – the most notable example here being the high turnout for the second set of referendum elections held in 1992, which were held on the same day as the 1992 General Election. The fact that the 1999 and 2004 referendum contests were held on the same day as local and European elections probably was also a factor in terms of increasing turnout propensity for those contests, especially in the more rural areas where turnout levels for local elections will generally tend to be highest. A similar trend could also be inferred in terms of explaining the relatively high turnouts for the 2011 contests, which were held on the same day as the 2011 Presidential Election (and the Dublin West by-election).

The level of turnout can also be seen to reflect the issues involved in the contest/these contests, with high profile issues often resulting in higher turnout, as evident in the high turnout recorded for the 1971 referendum on joining the EEC. With the exception of the contests in the late 1990s and early 2000s, referendum elections on European Union issues or moral issues (divorce, right to life/choice) are usually higher than those for other contests, especially those in which the issues appear to be relatively non-contentious, as with the adoption rights/university representation in the Seanad contests in 1979 and the 1996 bail referendum, which are associated with the two lowest turnouts for referendum contests to date in the history of the state.

The day of the week that an election is held on is believed to impact on turnout levels, with the general consensus being that weekend voting is the best in terms of facilitating a higher turnout level. Ironically the 2012 Children’s Referendum was only be the second time a referendum election has been held on a Saturday and this was marked by a very disappointing polling level, as shown by Figure 1, but it could argued that turnout levels would have been even lower for that contest had the election been held on a weekday instead. The only other occasion that a referendum contest has been held on a Saturday was the second referendum on the Nice Treaty, held in October 2002, in which the holding of the election on a weekend is believed to have played a role in increasing the turnout level by 448,703 votes (and by 14.68% in percentage terms) relative to the first Nice Treaty referendum, which had been held on a Thursday, almost a year and half beforehand. Thursday has proven to be the most popular day on which to hold a referendum election (or a series of referendum elections), with Thursday being used as a polling day on 13 occasions to day (48.1% of all cases, if the October 4th contests are also factored in). Wednesday and Friday are the next most popular days to hold polling on, with these days each having been used on five different occasions prior to the Seanad Abolition/Court of Appeals referendum votes. The October 4th poll however will mark the sixth time that that a referendum contest, or number of referendum contests, has taken place on a Friday. Wednesday proved to be a more popular day for polling in the case of the earlier referendum contests while Friday was only used as a polling day for a referendum contest for the first time in 1995 (Divorce referendum). The contests held on a Friday (1995, 1998, 1999, 2004, 2009) and Saturday (second referendum vote in 2002) – the 2012 Children’s Referendum marking a notable exception here – have tended to compare favourably in terms of  turnout levels with those for other referendums held in a similar period (1990s and 2000s). It could be argued that Friday/Saturday contests tend to be chosen in cases where government believes a high turnout to be necessary for the passing of a referendum. There has never been a referendum election on a Monday or a Sunday to date, while polling has taken place on a Tuesday on just one occasion (1987) to date. 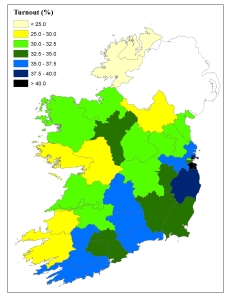 One final point to note is that geographical studies of turnout patterns point to fairly consistent trends running across different referendum contests. As opposed to the trend for local and general elections in which the highest turnout levels tend to be recorded in the more rural areas, the lowest turnouts in referendum elections tend to be found in the more western constituencies (with turnout levels usually lowest in Donegal) and average turnouts for urban areas can be as high, or higher, than the average for rural areas (as shown by Figure 2). Referendum turnout levels tend to be highest in the more middle class urban constituencies, with the highest levels usually being recorded in the constituencies of Dun Laoghaire, Dublin North-Central (which will form part of the new Dublin Bay North constituency following the next general election) and Dublin South (whose boundaries are being significantly amended and which is being renamed as Dublin Rathdown).  Looking at a sub-constituency level, it can be seen that class trends for referendum contests tend however to reflect those for other electoral contests, although class differentials in turnout rates tend to be heightened for referendum contests, relative to those for general and especially local election contests. A more detailed discussion of referendum turnouts (in this case relating to EU treaties) in the Dublin City area has been covered in an earlier post. Indeed this and all other voter turnout related posts from this website can be accessed using the following link.

Note: The official government publication on Referendum voting patterns, containing detailed (by constituency or by county/local authority area) referendum results for all contests held up to the present date, is well worth checking out.

4 Responses to Voting patterns and turnout levels in Referendum elections in the Republic of Ireland, 1937-2013