It’s Election Day in the United Kingdom. What do the final opinion poll figures of the general election campaign suggest in relation to the likely number of seats that each party will win in that contest? The opinion polls across the final few weeks of the campaign showed Labour gaining significant ground on the Conservatives, albeit not to such an extent that these improved Labour fortunes seem likely to prevent the Conservatives winning another majority in the House of Commons after the June 8th election. Both of the two largest parties, as of now, are well ahead of the support levels that they won at the 2015 General Election, meaning that the smaller parties are at risk of being squeezed out in this contest.

As the last general election in the United Kingdom showed, estimating seat levels for the House of Commons elections is a hazardous task to engage in, as the votes to seats ratio will be skewed by geography and spatial differences in terms of support gains/losses for different parties. For instance, Labour’s overall share of the vote increased in 2015, relative to the 2010 General Election, by 1.5%, but the extent of the party’s support/seat losses to the Scottish National Party in Scotland (returning with just 1 of the 41 seats that the party had won there in 2010) meant that most of the 701,147 votes won by Labour in Scotland were effectively wasted votes. 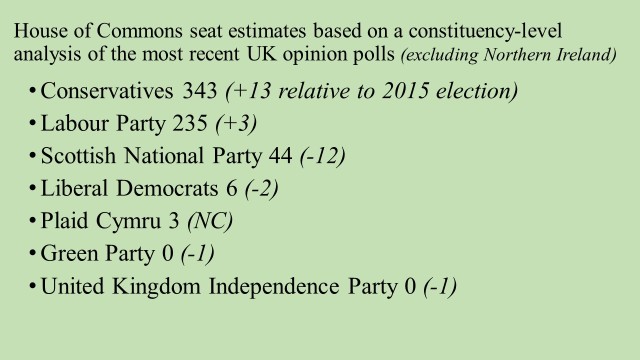 Improving poll fortunes for Labour over the past few weeks have seen the party now exceeding  the level of support that they had at the 2015 election by a margin of almost six percentage points. The Liberal Democrats are slightly below the support levels that they won in 2015 and this party has lost some ground across the opinion polls held in recent weeks. The extent of the swing to the Conservative Party, as measured in the most recent opinion polls, would see the Liberal Democrats losing seats to the Conservatives if these poll figures were to be replicated at the real election on 8th June, but Labour could make a handful of gains at the expense of the Conservatives, if the most recent poll figures were to be replicated in today’s actual election contest.  Moreover, there would be a handful of Conservative-held seats that would be vulnerable to further Labour gains, if these poll figures were to be replicated in today’s electoral contest, such as

If the Conservatives were to fail to hold these seats/constituencies tonight, then this would put their majority in the House of Commons under pressure, especially if the party was not to do as well in Scotland, as recent opinion polls have suggested, or to lose out on making gains at the expense of the Liberal Democrats in the highly marginal constituencies of Southport and Carshalton & Wallington.

The Green Party and the United Kingdom Independence Party, by contrast, would see an overall loss in their national support levels if the most recent poll figures were replicated at the June 8th contest. Both parties would be expected to lose the one seat that they won in 2015 based on these figures. It it worth noting that the Greens held their seat in Brighton Pavilion in 2010 on much smaller share of the national vote (0.9%) that the level they held when they retained that seat in 2015, but also a smaller national vote share relative to where they current stand in the national opinion polls. However, recent shifts in the national opinion polls suggest that that this seat has become increasingly marginal and vulnerable to a gain by the Labour Party (as suggested in this analysis) or the Conservatives.

The model predicts that the Conservative Party would gain seats in the following 15 constituencies:

Most of these gains would come at the expense of the Scottish National Party, with the support/seats estimates suggesting that gains would also be made at the expense of the United Kingdom Independence Party (Clacton), and the Liberal Democrats (Carshalton & Wallington and Southport), should the opinion poll support levels that this analysis is based pan out in today’s actual general election contest.

By contrast, the model estimates that the Conservatives would lose seats to the Labour Party in the constituencies of Gower and Croydon Central.

How this model works: As with my analyses of opinion poll figures in Ireland, constituency support estimates for different parties and groupings form the basis of the general approach taken with this analysis. This approach seeks to ask the following question in relation to different opinion poll results – what do these poll figures mean in terms of the likely number of House of Commons seats that could be won by the different parties and groupings on those national support levels? As the electoral system employed in the United Kingdom is most definitely not a proportional electoral system, the proportion of seats won by parties will not measure up exactly to their actual share of the first preference votes. Geography will have a very significant impact here, while first past the post electoral systems, such as the one used in the United Kingdom, will always act to the advantage of the largest parties and will significantly disadvantage the smaller parties, unless their votes are strongly clustered in a specific geographical region – e.g. Scotland, Wales or Northern Ireland.

First preference votes need to be filtered through the system of the United Kingdom’s general election constituencies . In order to address the question, I estimate what the party first preference votes would be in the different constituencies, assuming similar (proportional) changes in party vote shares in all constituencies to those that are being suggested by a particular opinion poll, or – in this case – an average of the most recent polls. This of course is a very rough model and it cannot take appropriate account of the fact that changing support levels between elections tend to vary geographically 9as occurred in the 2015 contest). Thus constituency support estimates for different parties/groupings will be over-estimated in some constituencies and under-estimated in others, but the expectation would be that the overall national seat figures figures estimated will be relatively close to the true level, given that over-estimates in certain constituencies will be offset by under-estimates in others. Based on these estimated constituency support figures, I proceed to estimate the destination of seats in the different constituencies. Due to unusually high/low support levels for some parties or political groupings in certain constituencies in the previous election, the model may throw up occasional constituency predictions that are unlikely to pan out in a “real election”, but of course the estimates here cannot be seen as highly accurate estimates of support levels at the constituency level as in a “real election” party support changes will vary significantly across constituency given uneven geographical shifts in support levels.

The point to remember here is that the ultimate aim of this model is to get an overall, national-level, estimate of seat numbers and these are based, as noted earlier, on the proviso that an over-prediction in one constituency may be offset by an under-prediction in another constituency. This model does not aim, or expect, to produce 100% accurate seat level predictions for each of the 650 constituencies (and indeed cannot do so for the 18 constituencies in Northern Ireland). These analyses simply estimate what party seat levels would be, should such national support trends be replicated in an actual general election. For a variety of reasons (including the impact of high levels of undecided voters in a specific poll), the actual result of an election contest may vary from the figures suggested by an opinion poll, even if the poll is carried out relatively close to election day, or on election day itself as in the case of exit polls, but the likelihood of such variation is not something that can be factored into this model.